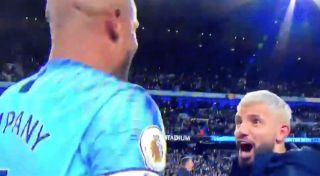 The Belgian defender stepped up and hammered home the winning goal in the 70th minute, taking City back to the top of the Premier League table.

The title race now goes into the final weekend of the season, with City leading rivals Liverpool by just a point. However, thanks to Kompany’s goal, their fate is in their own hands as they know a win over Brighton will be enough to successfully defend their crown.

However, if Aguero had his way, Kompany would never have taken the shot on at all as he revealed in their exchange after the game, as seen in the video below.

The City striker can be heard saying that he was urging Kompany not to take the shot on, but he’ll be relieved he did as the hosts were struggling to find a breakthrough until their inspirational captain produced what could prove to be a decisive moment in what is a thrilling title race.

Sergio Aguero has some pretty bad advice for Vincent Kompany