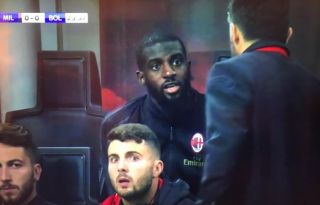 AC Milan midfielder and Chelsea loanee Tiemoue Bakayoko might have landed himself in hot water with boss Gennaro Gattuso on Monday night.

As noted by Calciomercato, the relationship between the two has soured this week after the 24-year-old turned up late for training which has in turn led to suggestions that the Rossoneri won’t exercise the clause in his deal to sign him on a permanent basis.

The latest incident on Monday during the clash with Bologna won’t have done him any favours, as the video below appears to show Bakayoko telling Gattuso to ‘f*** off man’.

It happened after the Frenchman was expected to come on and replace Lucas Biglia after the Argentine suffered an injury in the first half.

However, it appeared as though Bakayoko wasn’t ready to come on and so Gattuso opted to introduce Jose Mauri instead.

That’s where things turned ugly as it appears as though Bakayoko had a little bit too much to say to his coach, and so it remains to be seen how that impacts on his playing time in the final few games of this season and whether or not he has scuppered his own chances of a permanent switch to the San Siro.

It comes after the Chelsea loanee had established himself as a fundamental figure in the side, but things have certainly taken a turn for the worse this past week, with many fans on Twitter believing he had an x-rated rant at his coach, as seen in the comments below.

Season over for Bakayoko considering his reaction as he tells Gattuso to “fuck off man” ??pic.twitter.com/U0xovG1HmV

Bakayoko out there literally telling Gattuso to fuck off. pic.twitter.com/YS1ebJdRWa

Bakayoko telling gattuso to “fuck off, man”. Cutrones face is everything. -Y https://t.co/th2WjTKy5M