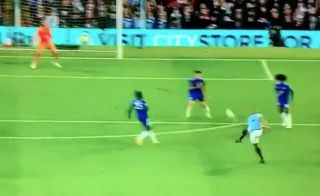 With the tension rising at the Etihad, Vincent Kompany stepped up and scored a stunning goal for Man City to break the deadlock against Leicester City.

The reigning Premier League champions knew that they had to win to go back top of the table and to keep their title fate in their own hands heading into the final weekend of the campaign.

As the minutes ticked away, there was no doubt that the tension and anxiousness was building for the hosts, with Leicester proving to be difficult to break down.

However, as seen in the video below, Kompany produced a moment of absolute magic and quality as he smashed a long-distance strike into the back of the net to finally find a way past Kasper Schmeichel.

Man City will still have to hold onto their lead as it promises to be nervous ending to the game if they can’t find a second, but their nerves will surely have been settled after this effort from Kompany saw the Etihad erupt.

Vincent Kompany! That is a title winning goal from a legend of the game ?? pic.twitter.com/xL1YPMuqfs