There’s no two ways about it – Arsenal are a mess.

The Gunners had chance after chance to claim a place in this season’s top four and show they’d made genuine progress in their first post-Arsene Wenger season, and they bottled it again and again.

And while ‘bottling it’ might be an over-used football cliche of modern times, it is so often perfectly appropriate to describe this group of serial under-achievers at Arsenal.

Following a 2-0 win over Manchester United at the Emirates Stadium back in March, the Gunners looked one of the favourites to get either third or fourth spot as they had what looked on paper to be the easiest run of fixtures remaining.

This didn’t prove entirely inaccurate as their rivals have all struggled over the finishing line as well, with Manchester United also confirmed as missing out on Champions League football yesterday, while Chelsea and Tottenham will be wondering how the hell they did it.

The truth is, it was gifted to them by Arsenal, who have just one win in their last six league games, losing three in a row and conceding three in each of those games against Crystal Palace, Wolves and Leicester.

Arsenal now have to win the Europa League to get into the Champions League next season, and yes, we’re assuming they won’t scrape into fourth place courtesy of that eight-goal swing in goal difference needed on the final day that is, we suppose, not *technically* impossible.

If Unai Emery can deliver the Europa, we’ll reconsider our position here, but for now we think we have five pretty good reasons for saying the Gunners should already be seriously thinking about a change of manager…

Look, we get that there’s a lot of competition in the Premier League these days and making the top four is quite possibly harder than ever. Good teams will inevitably miss out, and there was not a lot in it between Chelsea, Tottenham, Man Utd and Arsenal.

That said, Emery will have been hired to at the very least deliver Champions League qualification. And for that to be in his side’s hands only for the team to hit their worst run of form at the most important stage of the season is unforgivable.

It’s now going to be three seasons in a row that Arsenal have failed to finish in the top four, and the most worrying thing about this season is that the club’s record is really not far off being identical to what it was in Wenger’s final season.

With a game to go, the north Londoners have just four points more than their total from 2017/18, one more win, four fewer goals scored, and one fewer conceded.

Arsenal fans wanted change. They haven’t got it. 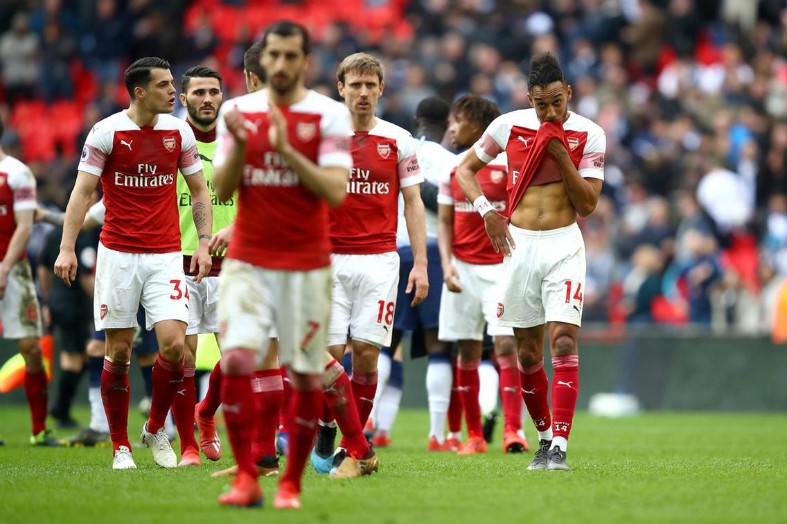 Arsenal are all but out of the top four race, barring a final-day miracle

Like last season, Arsenal’s defence is an absolute shambles, with Emery really not looking like getting very far with his supposedly highly analytical approach.

Unlike Wenger, the former Sevilla manager has a reputation for using plenty of video analysis, and tries to set his team up to respond to their opponents’ strengths.

And yet, Arsenal have conceded 50+ goals for the second year in a row, with the team still conceding the same soft goals thanks to a general lack of cohesion at the back, as well as individual blunders from players like Shkodran Mustafi and Granit Xhaka, who should surely be nowhere near the first XI.

Yes, they could still save themselves in the Europa League, but this Arsenal defence is always going to give opponents big chances, so don’t be so sure they can hold on to a 3-1 lead away to Valencia for the semi-final second leg, never mind dealing with Chelsea in the final.

Granit Xhaka has now given away four penalties in the Premier League since joining Arsenal in summer 2016, more than any other player has conceded for a single team in that time. [@Squawka] #afc pic.twitter.com/Pn7PqRnSfB

Arsenal’s away record last season was really alarming, and despite initial signs of progress in that department this season, it’s been a big problem again.

In their first seven away matches in the league this term, Arsenal only lost one, and that was a close 3-2 defeat to Chelsea at Stamford Bridge, with Emery helping the team to some impressive performances on the road, most notably that 5-1 win at Fulham, and a 2-2 draw away to Manchester United that they were pretty unlucky not to win.

Since that draw at Old Trafford, however, Arsenal have won just two out of eleven on their travels, drawing two and losing seven.

One of those wins came against a dreadful Huddersfield Town side, and the other via a very lucky goal at Watford. Among the defeats have been that 5-1 thrashing by Liverpool, and those recent poor performances against Everton, Wolves and Leicester.

If only home games counted, Arsenal would be third. If only away games counted, they’d be 10th, with teams like Crystal Palace, Wolves, Watford and Leicester all picking up more points on the road than the Gunners this season.