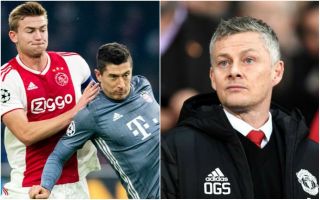 Manchester United have reportedly held talks with Ajax defender Matthijs de Ligt over a summer transfer, but he’s told them he doesn’t want the move to Old Trafford.

The highly-rated young Netherlands international is also linked with Liverpool by the Daily Star, though it’s suggested he’d favour joining either Real Madrid or Barcelona when he leaves Ajax.

MORE: Headache for Solskjaer: Manchester United star ready to push for transfer as he doesn’t want to play in Europa League

De Ligt has looked superb this season, helping his club reach the semi-finals of the Champions League after playing a starring role in big wins over Real Madrid and Juventus.

However, the Star claim he’s not keen on a potential £60million move to United, though Liverpool will hope they could still be in contention for his signature.

The 19-year-old would be ideal as a partner for fellow Dutchman Virgil van Dijk at Anfield, giving the Reds more depth in that position next season.

Despite looking solid at the back this term, Liverpool could surely do with bringing someone in in that area due to Joe Gomez’s poor injury record and players like Dejan Lovren and Joel Matip not really good enough as long-term backup options.

United will also be disappointed not to be able to secure De Ligt’s signature, with the Red Devils in a real state at the back after poor seasons from the likes of Chris  Smalling, Phil Jones and Eric Bailly.