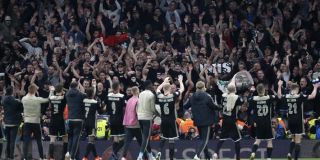 Telstar have opted to split with Jordie van der Laan after he reportedly pulled a sickie to go watch Ajax’s clash with Tottenham last week.

The Eredivisie giants secured a 1-0 win in north London in the first leg of their Champions League semi-final tie to hold the advantage heading into the reverse fixture on Wednesday night.

As noted by The Sun, among the travelling supporters was Van der Laan, an avid Ajax fan, who in an attempt to ensure that he was able to make the trip to England called in sick with Telstar.

Unfortunately for him, it’s claimed that he was spotted on TV in the away stand, and that has led to a split between the club and the 25-year-old.

It’s noted that his current deal was set to expire this summer anyway, but naturally it’s not the way in which he would have wanted to part company as it could also reflect badly on him moving forward in terms of interested clubs.

However, he didn’t sound particularly remorseful when discussing his cheeky tactics.

He told IJmuider Courant: “Of course I realise that it has been a very awkward situation.

“I had a conversation with [the club] last Thursday about my situation and, in good harmony, we decided to separate.

“I called in sick because I was convinced that I wouldn’t be released from the training.

“I took into account that there was nothing to play for anymore for Telstar and myself and, given my playing time lately, I had only a small chance of facing Jong PSV.”

Fair play to him for trying it, and it’s likely that he has bagged himself tickets for the second leg on Wednesday night to see if Ajax can continue their memorable campaign.