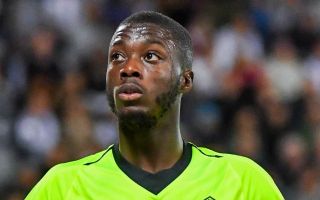 Arsenal have reportedly held talks over sealing the transfer of Lille star Nicolas Pepe this summer, though they could be priced out of the deal.

According to France Football, as translated in the tweet below by Get French Football News, Arsenal have tried negotiating the signing of Pepe to strengthen their attack next season, but are more likely to bring in one of Bournemouth’s Ryan Fraser or Ajax starlet David Neres instead.

This could be good news for Manchester United and Liverpool, both of whom have also been linked with Pepe for around £60million in a recent report from the Daily Express.

The Ivory Coast international has been in superb form in Ligue 1 this season and looks a player capable of strengthening almost any top side in Europe.

Man Utd are in particular need of upgrades on the likes of Alexis Sanchez and Anthony Martial, with the Mail reporting that the Frenchman is the latest player whose Old Trafford future has come into some doubt.

Liverpool, meanwhile, don’t desperately need a player like Pepe right now, though the 23-year-old could come in useful if Sadio Mane leaves for Real Madrid, with Marca recently reporting he’s a top target for Zinedine Zidane.

Nicolas Pepe has been linked with Arsenal, Liverpool and Manchester United