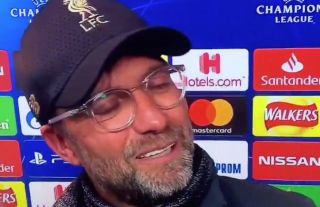 Liverpool boss Jurgen Klopp was understandably overjoyed as his side produced one of the most memorable comebacks in Champions League history.

The Merseyside giants trailed Barcelona 3-0 after the first leg of their semi-final tie at the Nou Camp, and so had it all to do in the reverse fixture at Anfield on Tuesday night.

Braces from Divock Origi and Georginio Wijnaldum saw them do the impossible though, as they secured a 4-0 win to book their place in the Final in Madrid on June 1.

Speaking to BT Sport after the game, Klopp simply had to get his thoughts off his chest and after a quick glance at his watch to make sure it was safe and past the watershed, the German tactician proceeded to hilariously drop an F bomb on live TV, as seen in the video below.

Reporter Des Kelly continued the interview thereafter before presenter Gary Lineker refused to apologise for the language as he insisted that Klopp was justified in using it given the events of the night and the time at which he said it.

Few can surely bemoan this as it’s simply a frank reaction from the Liverpool boss, who will now hope to secure a win this weekend and keep themselves in the hunt for the Premier League title, albeit they need a slip up from rivals Manchester City to keep their hopes of a double alive.

Nevertheless, nothing will take away from Tuesday night as Liverpool produced another magical European night at Anfield for their fans.