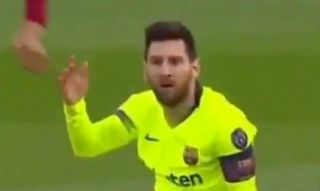 Liverpool have the unenviable task of trying to keep Lionel Messi quiet on Tuesday night, and Andy Robertson had a unique style of doing it.

The Merseyside giants were looking to overturn a 3-0 deficit in the second leg of their Champions League semi-final tie in midweek, and they were handed a dream start with Divock Origi finding an early breakthrough.

That will undoubtedly unsettle Barcelona, although they will remain a massive threat themselves with the quality that they possess in the final third and an away goal for the reigning La Liga champions would surely kill the tie.

However, Robertson will try to keep Messi under wraps at Anfield, and he certainly let the Argentine icon know he was around as seen in the video below.

It could be argued that he was slightly fortunate to escape any action from the officials on this one, but it remains to be seen whether or not he has merely angered Messi who was so pivotal in the first leg with a double to put Barcelona in a strong position prior to arriving at Anfield.

Andy Robertson’s attempt to rough up Lionel Messi early on ?