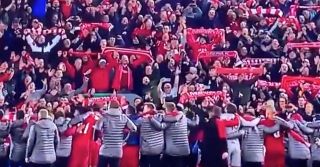 Liverpool produced another magical European night at Anfield on Tuesday as they secured a 4-0 win over Barcelona to make it to the Champions League final.

Few would have envisaged such an incredible turnaround after their 3-0 defeat in the first leg at the Nou Camp last week, especially with Mohamed Salah and Roberto Firmino both missing due to injury.

However, Jurgen Klopp’s men found the inspiration to pull it off against a bitterly poor Barcelona side who have now suffered a heartbreaking exit from the Champions League two years in a row after collapsing away from home at Roma and now Liverpool.

The Merseyside giants will now prepare for the Final at the Wanda Metropolitano on June 1, with either Ajax or Tottenham set to face them in the season finale.

Before that though, the Anfield faithful treated us to an incredible sight after the full-time whistle, as the players and Liverpool staff stood together in front of the Kop as an emotional rendition of ‘You’ll Never Walk Alone’ rang around the stadium.

It’s not the first memorable European night that they’ve seen at Anfield, and it’s more than likely that it won’t be the last…

This is special. This is so special.

Everyone is lost for words.