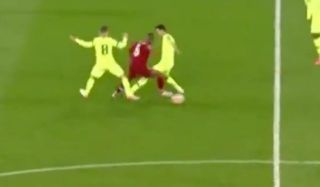 Georginio Wijnaldum was a fundamental figure in Liverpool’s epic comeback against Barcelona on Tuesday night, and he even had time to produce this bit of magic.

The Dutchman was introduced at half-time with the Reds 1-0 up, but still trailing their rivals after losing the first leg of their Champions League semi-final tie 3-0 at the Nou Camp.

However, a quick-fire double from the substitute levelled things up soon after, and Divock Origi added his second of the game to take Liverpool through to the Final in Madrid on June 1.

As seen in the video below though, Wijnaldum was on absolute fire during the second half at Anfield, as he even had time to casually leave Sergio Busquets and Arthur trailing with a wonderful turn and bit of skill to evade the challenges and spark another Liverpool attack.

Liverpool needed someone to step up in a big way in this game, and Wijnaldum was undoubtedly on hand to answer the call and help inspire them to one of the greatest comebacks in Champions League history.

Busquets & Arthur on your tail ?
No room for error ?