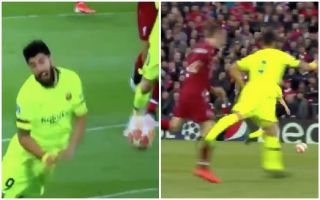 Luis Suarez managed to upset some Liverpool fans last week, and he could risk doing the same again on Barcelona’s trip to Anfield.

As noted by the Metro, the Uruguayan stalwart’s celebrations after scoring in the first leg of the Champions League semi-final encounter at the Nou Camp led to an angry reaction from some supporters.

That led to the 32-year-old promising not to celebrate in the same way were he to find the back of the net at Anfield against his former club, as per BBC Sport, but he still managed to court controversy in the opening 45 minutes.

As seen in the videos below, not only did he appear to over-exaggerate a dive when tangling with Virgil van Dijk, but replays appeared to show him have a kick out at Liverpool left-back Andy Robertson too.

It had been reported after the first leg at the Nou Camp that the pair were involved in a spat in the tunnel at half-time, as per the Daily Mail, and so it would appear as though there is no love lost between the duo as their issues rumble on.

Suarez did go over to check on Robertson as he received treatment which was seemingly appreciated by the Scottish international, but if Suarez continues with this incidents, he surely isn’t doing himself any favours in terms of trying to get back in the good books of the Liverpool fans.

Robertson’s night came to an end shortly after, as he was replaced by Georginio Wijnaldum at half-time.

Has Luis Suárez kicked out at Andy Robertson here?

The Scot goes down after a coming together with the Barcelona striker. pic.twitter.com/0TbHfRmZ1i