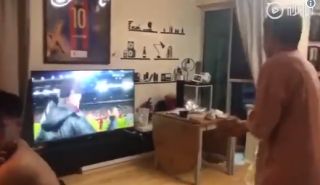 One Barcelona fan was so angry last night that they smashed up their TV after the 4-0 loss to Liverpool that dumped them out of the Champions League.

Having won the first leg of this semi-final tie 3-0, the Catalan giants were victims of a major upset as Liverpool somehow came back to progress 4-3 on aggregate and book their place in next month’s final in Madrid.

Barcelona went out in similar fashion to Roma at the quarter-final stages last season, so one can understand their fans are feeling a little on edge at the moment.

Still, this kid is surely going to be in huge trouble with his family after trashing their TV set!