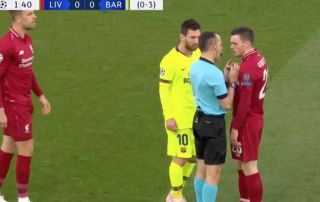 Former Premier League referee Mark Halsey has claimed that Andy Robertson should’ve been sent off for an altercation with Lionel Messi during Liverpool’s 4-0 win over Barcelona on Tuesday night.

Two goals each from Georginio Wijnaldum and Divock Origi ended up seeing Liverpool through to the Champions League final on Tuesday in what was one of the club’s greatest ever European nights.

However, it could have all been different had Andy Robertson been sent off for an incident involving Lionel Messi that occurred during the match.

During the tie, Messi went down after being tackled, with Robertson then pushing the Argentine in the head with two hands, something that former Premier League ref Mark Halsey thinks could’ve seen the defender sent off.

According to the Sun, Halsey commented on the incident, stating “You could argue Andy Robertson should have been sent off for pushing Lionel Messi in the head. The rule of thumb for a referee is if you strike an opponent above the neck then it is a red card offence.”

Had Robertson been issued a red card for the incident, it would’ve completely turned the tie on its head, and is a decision that surely would’ve seen Barca qualify for the final for the first time since 2015.

But alas, the incident was not picked up on by the referee or those in charge of VAR, something Liverpool fans can count themselves somewhat lucky for.