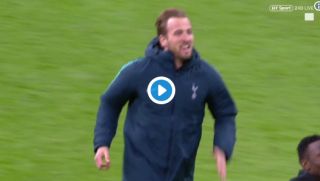 Watch below as the England international runs with ease – perhaps showing signs that he’s over the worst of his ankle injury!

If so, Liverpool had better watch out as they would surely rather not be coming up against Kane in next month’s Champions League final.

The Reds booked their place with another sensational game against Barcelona last night, giving us only the second all-Premier League final in this competition.

And if Kane makes it back, you can bank on him making an impact in what promises to be another great game in this barmy season.