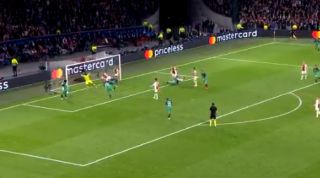 Jan Vertonghen had a glorious chance for Tottenham late on in tonight’s Champions League semi-final against Ajax.

Watch below as the Belgian came agonisingly close as he had a free header at goal, only to hit the bar from close range.

Vertonghen then had another try, but saw his rather weak shot cleared away just in front of the goal line.

It feels like that might have been the big chance Spurs were waiting for and they didn’t take it.

Still, it’s a miracle they’re still in this tie at all after losing 1-0 at home in the first leg and going 2-0 down in today’s first half.