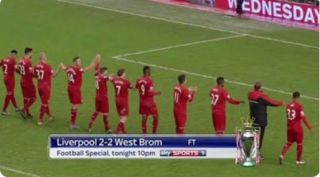 Liverpool could laugh at themselves a little after their incredible comeback against Barcelona in last night’s Champions League semi-final.

The Reds recovered from a 3-0 defeat in the first leg at the Nou Camp to thrash Barca 4-0 at Anfield and book their places in next month’s final in Madrid.

Understandably, there were wild celebrations on the Anfield pitch, which were reminiscent of…a 2-2 draw with West Brom a couple of years ago.

Jurgen Klopp and his players were widely mocked for an over-the-top reaction to a draw at home to the Baggies, who posted an image of it whilst also congratulating LFC on their achievement.

Liverpool responded showing they can laugh at themselves too!