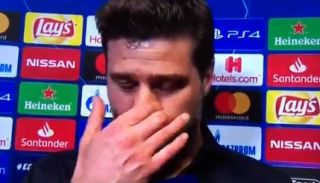 Mauricio Pochettino was in tears on the pitch after Tottenham’s 3-2 win over Ajax, and broke down again in his post-match interview.

Watch the video below as the Argentine gets very emotional, thanking his family and everyone who’s supported him and the team.

This is a truly incredible achievement by Pochettino, who has not had the kind of money available to big clubs like Manchester City, Paris Saint-Germain, Barcelona, Real Madrid and Juventus – all of whom under-achieved in this season’s Champions League.

Spurs, however, can now look forward to a final against Liverpool in Madrid next month, with Pochettino’s side more than good enough to be confident they can beat the Reds in a one-off game.