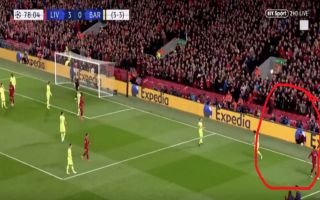 Liverpool produced an absolutely sensational comeback against Barcelona in the Champions League on Tuesday as Jurgen Klopp’s men booked their place in the final.

Two goals each from Divock Origi and Georginio Wijnaldum proved to be the difference between the two sides in the end, as the Reds overturned a 3-0 first leg deficit to qualify for their second Champions League final in as many years.

The winning goal in the tie came from Origi, after the Belgian slammed home after a brilliant, quick corner from Trent Alexander-Arnold that took all of the Barcelona team by surprise.

However, despite Alexander-Arnold providing the assist and Origi scoring the goal, fans seemed to focus on one other person in particular for Liverpool’s fourth goal: a ball boy.

As seen in the clips below, the unnamed Liverpool ball boy was very quick and instinctive in his attempts to help Alexander-Arnold take the corner, something that has seen a number of Liverpool fans heap praise on the kid.

You can find all of their comments below.

It is very instinctive and smart play from the ball boy, we have to say!

Someone give that ball boy a trophy pic.twitter.com/JyQpYeRE5q

#ballboy #liverpool someone give that ballboy a bonus!! pic.twitter.com/8sEAxXiB2N

What a moment from this scouser!Pure genius!
Also the ball boy should get huge praise and a VIP ticket to the final. pic.twitter.com/boGfbPlDpm

Give this ball boy a pay rise please @LFC pic.twitter.com/fb3u6zniwm

The real hero of those 'epic comeback' match is Anfield Ball Boy pic.twitter.com/wwCH7mbgk2

The real hero! Give that ball boy a medal ???? pic.twitter.com/0ZfaE1tFad

The ball boy deserves the key to Liverpool ????? https://t.co/7lUdlN3jYd 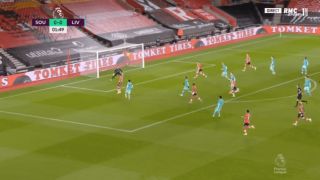