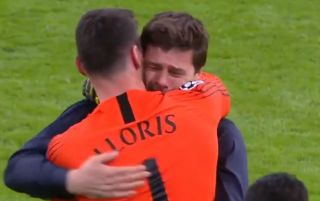 Tottenham manager Mauricio Pochettino was in floods of tears after he saw his side stage a sensational comeback to beat Ajax and join Liverpool in the Champions League final.

Watch the video below of the epic Spurs celebrations, in which Pochettino does not hold back in absolutely letting his emotions go.

We can't do this anymore! ?

There's no words for this.

A night no one will ever forget ?? pic.twitter.com/Rt2VYWiEag

Reminder: Tottenham lost 1-0 at home to Ajax in the first leg of this semi-final tie, and went 2-0 down on the night in the Amsterdam Arena.

Lucas Moura then hit a second-half hat-trick to book Spurs’ place in next month’s final in what will go down as yet another absolute classic from this remarkable season.

Just yesterday, Liverpool also progressed into the Champions League final with a 4-0 win over Barcelona, having lost the first leg 3-0.

Football has absolutely lost the plot and we’re loving it.