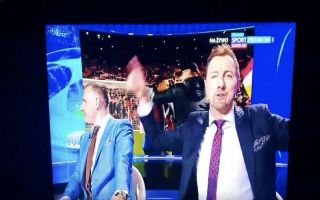 Former Liverpool goalkeeper Jerzy Dudek expressed his joy after watching his old club secure a famous win over Barcelona in the Champions League.

The Reds progressed to the European Cup final at Barca’s expense after a stunning 4-0 win at Anfield, overturning a 3-0 deficit from the first leg.

Divock Origi and Georginio Wijnaldum grabbed two goals each to seal an amazing victory for Jurgen Klopp’s side, who will now face either Ajax or Tottenham in the showpiece event on June 1.

Dudek, who earned legendary status at Liverpool after his heroics in the 2005 Champions League final win over AC Milan, sang the club anthem while covering the game for Polish TV, showing his passion for the club still burns as brightly as ever.

Check out the ex-Liverpool shot-stopper celebrating a historic moment below, via Twitter.

WHAT A SPECIAL NIGHT!!! WE’RE GOING TO THE CHAMPIONS LEAGUE FINAL!! https://t.co/p9JxS3cfZS