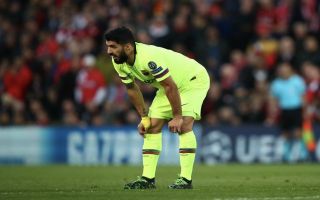 Barcelona striker Luis Suarez expressed his disappointment after Liverpool secured a stunning 4-0 win over the Spanish champions at Anfield in Europe.

Barca won the first leg of the Champions League semi-final tie 3-0 at Camp Nou and were expected to finish the job comfortably on English shores, but nothing went to plan for Ernesto Valverde’s side on Tuesday night.

Divock Origi gave the home side a 1-0 lead after seven minutes and the visitors missed a couple of clear chances to score a crucial away goal thereafter, ultimately heading in at the break still in control of the tie.

However, a quick-fire double from substitute Georginio Wijnaldum shortly after the interval turned the game on its head and from that point on Liverpool looked the most likely to progress to the final.

Sure enough, they did exactly that, thanks to Origi’s second goal of the night in the 79th minute, which he grabbed after a wonderful piece of quick-thinking from Trent Alexander-Arnold via a corner kick.

The Barcelona players were visibly shaken after the final whistle blew, not least Suarez, who failed to mastermind the downfall of his former club.

According to Metro Sport, the Uruguayan didn’t hold back in his assessment of the Barcelona squad after losing such a crucial game, as he stated post-match: “We are very sad, very hurt. It’s time to do a lot of self-criticism in our team, it is the second time that this has happened.

“We cannot commit the same mistake two years in a row, we have to think about many things and must be ourselves, tell us things in the face, things that we’ve done wrong.

“It’s not possible that in one minute we concede two goals.

“Their fourth goal? We looked like a youth team there. The coach does not have to be reproached, we are the ones who have to ask for forgiveness.”

Barca exited Europe’s top tier competition in similar circumstances last year, as AS Roma won 3-0 at home in the quarterfinals to overturn a 4-1 first leg defeat at Camp Nou.

The Blaugrana have failed to reach the final since winning the trophy for the fifth time in 2015 and their recent away record in the continental tournament will be a real cause for concern among the club’s top ranking officials.

Liverpool, meanwhile, will be hoping to avenge their defeat to Real Madrid in last year’s final, with Tottenham or Ajax set to join them at Wanda Metropolitano on June 1.