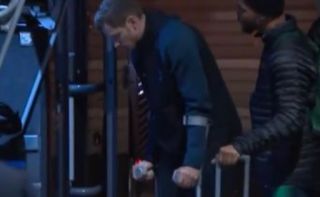 Liverpool fans may be relieved to see Tottenham look like facing a major injury problem as Jan Vertonghen did not look in good shape after the Champions League semi-final win over Ajax.

The Reds and Spurs will now contest next month’s final in Madrid, and Vertonghen is the kind of player Mauricio Pochettino will be eager to have fully fit for what is surely going to be the biggest game in the club’s history.

Hate to spoil the Spurs party so early, but this exclusive footage of Jan Vertonghen doesn’t look good. Protective boot on his right foot, the crutches. Smells like an ankle ligament injury.

Still, as the image in the tweet above shows, Vertonghen does not look in a good way, with journalist Kristof Terreur saying it looks like an ankle ligament injury.

Click the link here to see the full video of the Belgian defender struggling after the win over Ajax.

Talks held: Arsenal look to move for Premier League star as his contract expires in the summer