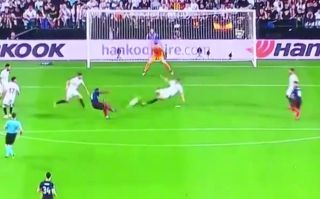 Alexandre Lacazette bagged Arsenal’s second goal of the night as they took a 2-1 lead at Valencia, with the aggregate scoreline now 5-2 in favour of the Gunners.

The Frenchman was in clinical form in the first leg of their Europa League semi-final tie, bagging a brace to give the Gunners the advantage heading into the reverse fixture.

After Kevin Gameiro had scored the opening goal of the night at the Mestalla, nerves would have been building for Arsenal given the events in Europe over the past two nights in games involving Liverpool and Tottenham.

However, Unai Emery’s men quickly snuffed out any threat of a comeback with Pierre-Emerick Aubameyang scoring soon after to bag a crucial away goal, and Lacazette added a second after the break to put Arsenal in complete control of the tie with two away goals.

Having all-but missed out on a top-four finish in the Premier League, the Gunners know that they must go all the way in Europe to secure a place back at the Champions League table next season.

Gameiro added a second for Valencia soon after to draw them level on the night, but they still have it all to do to ruin Arsenal’s hopes of advancing.

Arsenal are well on their way to the Europa League final ? pic.twitter.com/erR5YWMdP9

Arsenal injury news vs Newcastle: Two stars in contention for return and Lacazette is close to a return
More Stories Alexandre Lacazette