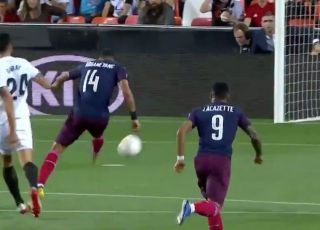 Arsenal fell behind at Valencia early on, but Pierre-Emerick Aubameyang produced the perfect response to net a crucial away goal.

Nerves would have been building for the Gunners after Kevin Gameiro broke the deadlock after just 11 minutes, with Arsenal leading from the first leg 3-1.

That would have given the hosts a huge lift in their bid to overturn their deficit, but their hopes were short-lived as Aubameyang stepped up and produced a superb finish, as seen in the video below.

It’s a story of Arsenal’s season in a nutshell in truth, as after being carved open and being made to look poor defensively on the counter attack, their world-class firepower has got them back on level terms as they look to secure their place in the Europa League final.

With finishing like this, Unai Emery will be confident that his men can deliver when needed, as Aubameyang took his tally to 27 goals in 49 games this season to move the Gunners ever closer to a place in the final in Baku.

An early goal for Valencia ?

Brilliant from Lacazette, and a clinical finish ? pic.twitter.com/fzhsHdwtvZ