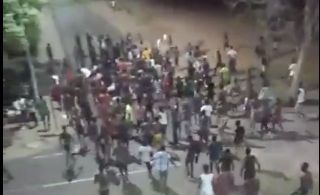 Liverpool’s epic comeback against Barcelona on Tuesday night got their fans celebrating wildly all over the world as they sent the Catalan giants crashing out.

Trailing 3-0 from the first leg in their Champions League semi-final tie, the Merseyside giants secured a 4-0 win over Barcelona at Anfield to advance to the final.

It was another truly memorable and magical European night at Anfield, with the Reds once again beating the odds to face Tottenham in Madrid on June 1.

Naturally, given the manner in which they came roaring back to seal the victory, it sent their fans into delirium at the stadium, and based on the video below, it clearly had a similar effect around the world!

It’s wonderful to see the emotions that football can provide, and these Liverpool fans certainly won’t be forgetting that night any time soon…

Some of the crazy Jubilation by Liverpool fans on Ghanaian campuses. pic.twitter.com/vtgJyRlQ0j