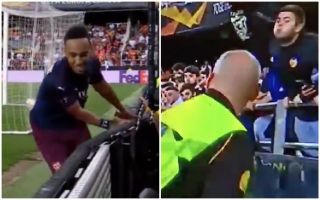 Arsenal booked their place in the Europa League final on Thursday night, with Pierre-Emerick Aubameyang bagging a world-class hat-trick.

The Gunners secured a 4-2 win in Spain in the second leg of their Europa League semi-final tie against Valencia, advancing to the final in Baku later this month with a 7-3 aggregate victory.

Aubameyang was influential in both legs, but his hat-trick at the Mestalla saw off Valencia as they simply had no answer to his prolific finishing along with Alexandre Lacazette.

However, there was an unsavoury moment towards the end of the game, as after the Arsenal striker scored his third goal, replays showed a Valencia fan sat behind the goal appear to try and spit at him.

Given the distance between them, it was never going to reach Aubameyang, but the video below clearly shows the fan in question spitting in the direction of the forward.

It remains to be seen what action Valencia take, as he can be clearly identified using the footage below…

Valencia fan attempting to spit on Aubameyang after he scored his third goal… Disgusting ? pic.twitter.com/4orzcj7l87