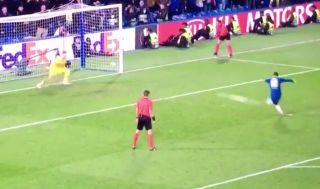 Chelsea will face Arsenal in the Europa League final in Baku on May 29 after seeing off Eintracht Frankfurt on penalties on Thursday night.

The Blues took the lead through Ruben Loftus-Cheek in the first half, but Luka Jovic drew the visitors level and ultimately sent the tie into extra-time.

The two sides still couldn’t be separated after an additional 30 minutes, and it took a penalty shoot-out for Chelsea to emerge victorious.

Kepa Arrizabalaga played his part as he made two crucial saves to swing the momentum back in Chelsea’s favour, with Eden Hazard presented with the opportunity to seal it for the hosts.

The Belgian superstar didn’t disappoint, as he confidently stroked his penalty into the back of the net to send Stamford Bridge wild, as they will now hope to end the campaign with a major trophy.

Coupled with their top-four finish in the Premier League, it hasn’t been too bad a debut season for Maurizio Sarri after all, but ultimately the Italian tactician will be desperate to now seal a win over Arsenal and pick up his first piece of silverware as Chelsea boss.