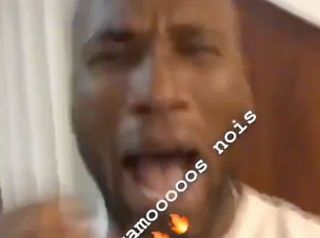 Chelsea secured their place in the Europa League final on Thursday night, eventually seeing off Eintracht Frankfurt on penalties at Stamford Bridge.

After Kepa Arrizabalaga produced two crucial saves to swing the momentum back in their favour, Eden Hazard stepped up to score the winning penalty.

In turn, the Blues will now face Arsenal in Baku on May 29, with the London rivals both desperate to secure a piece of silverware.

Time will tell if Hazard can inspire Chelsea to another victory to end the season, but as seen in the video below, Blues legend Didier Drogba was absolutely thrilled with the victory in midweek.

The 41-year-old established himself as a hero at Chelsea after a glittering stint in west London, and based on the video below, he’s still as passionate as ever about the club as he couldn’t hide his delight with their victory.

For Maurizio Sarri and his men though, they’ll now hope to finish the job and return home from Baku at the end of the month with a trophy to show for their efforts in Europe as it has undoubtedly been a long and taxing run for all involved.