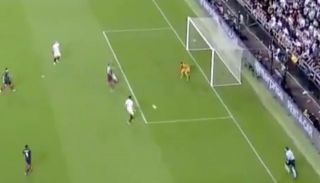 Arsenal were in fine form in front of goal on Thursday night, scoring three goals away at Valencia to put them on course for the Europa League final.

Pierre-Emerick Aubameyang helped himself to a double, the second of which was a wonderful bit of play from the forward as his darting run to the near post and finish left Valencia with no answer.

It came after a brilliant effort from outside the box for his first, while his two goals came either side of a strike from Alexandre Lacazette as the Gunners duo showed their class with a decisive impact.

That’s now a 6-3 lead for Arsenal on aggregate, with the firepower at Unai Emery’s disposal leading the way as they close in on a place in the Europa League final in Baku later this month.

Further, that’s now 28 goals in 49 games for Aubameyang this season, and it would come as no surprise if he was able to add to his tally in the remaining games of the campaign to edge Arsenal ever closer to winning a major trophy.

Aubameyang with a bang ????. Valencia sorry.

When I watch : Arsenal scores
When I switched off : Valencia scores.?pic.twitter.com/LAyjRDdKMU #VALARS