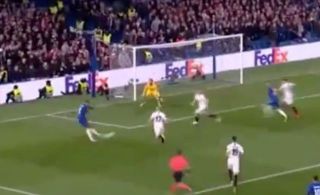 Chelsea took the lead at Stamford Bridge against Eintracht Frankfurt after a lovely finish from Ruben Loftus-Cheek broke the deadlock.

The Blues held the advantage after Pedro’s away goal in a 1-1 draw in the first leg of their Europa League semi-final tie, but there were some nervy moments in the early stages in the reverse fixture.

Frankfurt are undoubtedly a talented side with an attacking threat, but it was Chelsea who scored the all-important first goal of the night with Loftus-Cheek producing an excellent finish after some great work from Eden Hazard.

As seen in the video below, the Belgian ace twisted and turned into space and delivered a ball for Loftus-Cheek to latch onto in space, and the England international did the rest with an expertly curled finish into the bottom corner to strengthen Chelsea’s grip on a place in the Europa League final.

HAZARD TO LOFTUS-CHEEK GOAAAL!
This is becoming a regular occurrence now! pic.twitter.com/wAHC5nuG6J

Ruben Loftus-Cheek is on ? right now!

He grabs his 10th of the season and Chelsea lead Frankfurt…

Eden Hazard in the build-up ? pic.twitter.com/OvatvJfm2P

Highlighted: How Ruben Loftus-Cheek tricked Man United defensive line to pave way for Fulham goal in moment that Chelsea and their fans will love

Video: Chelsea loanee Ruben Loftus-Cheek scores for Fulham to give them late hope vs Everton