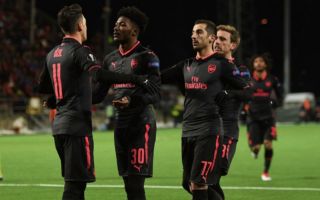 Arsenal face Chelsea in the Europa League final in Baku on May 29, but Henrikh Mkhitaryan may not be able to make the trip with the rest of the squad.

The Gunners saw off Valencia in style in their semi-final tie on Thursday night, picking up a 4-2 win in Spain to advance 7-3 on aggregate.

Meanwhile, Chelsea defeated Eintracht Frankfurt on penalties, and so coupled with the Champions League final between Liverpool and Tottenham, it’s an all-English finale in the Europa League too.

However, as noted by The Daily Mail, Mkhitaryan may play no part in the encounter, as it’s suggested that political tensions between Armenia and Azerbaijan could prevent him from travelling.

It’s added that the 30-year-old would need to obtain a permit to enter the country, and it’s the same issue which stopped him from featuring against Qarabag in the group stage.

In turn, it remains to be seen if Arsenal pursue the relevant avenues to get the green light for Mkhitaryan to travel, but given the recent history, it would seem unlikely.

The Armenian international’s influence this season has been limited with just six goals and seven assists in 38 appearances across all competitions.

Further, with Pierre-Emerick Aubameyang and Alexandre Lacazette in stunning form and the likes of Mesut Ozil available to pull the strings behind them, it could be argued that Unai Emery won’t miss Mkhitaryan too much.

Nevertheless, he has been an almost ever-present in Europe this season, bagging three of his assists in 11 Europa League outings, and so it’s fair to say that it will still be a blow for Arsenal if they are unable to call upon him if his creativity and goal threat in the final third is needed against Chelsea.