Having endured a disappointing season, Man Utd will arguably have to make big changes to their squad this summer to start competing for major honours again.

Ole Gunnar Solskjaer saw his side’s form dip alarmingly in recent weeks, which in turn resulted in them ending the campaign trophy-less while they’ll miss out on a Champions League qualification spot too.

SEE MORE: ‘Sums up how f****** awful this season has been’ – Some fans think Man United’s POTY winner highlights sorry state of affairs

In turn, the Norwegian tactician will surely want to reshuffle his squad to bring in players that fit his ideas and style of play moving forward, and it’s been reported that Man Utd could be on the verge of their first signing of the summer.

According to Sky Sports, they are said to be close to agreeing a deal for Swansea City winger Daniel James in a deal reportedly worth £15m.

The 21-year-old has scored five goals and provided 10 assists in 38 appearances so far this season for the Swans, while he has two senior caps for Wales to his name.

Given Solskjaer already has the likes of Marcus Rashford, Anthony Martial, Jesse Lingard, Romelu Lukaku and Alexis Sanchez competing for places in the final third, question marks could be raised as to whether signing another attacking player is the right move.

That would perhaps suggest that there will be exits too, but given their defensive record this season, reinforcements at the back will surely be the priority moving forward.

United have scored 65 goals in 37 league games, with only Chelsea scoring less of the top six sides, but they’ve conceded 52 goals in the same amount of games, giving them the worst defensive record of the top nine sides in the standings.

That in turn would tell its own story about where they should be strengthening, but James has arguably done enough to convince them he’s worth the investment if a deal is now completed with the likes of Sanchez and Martial disappointing for the most part this season. 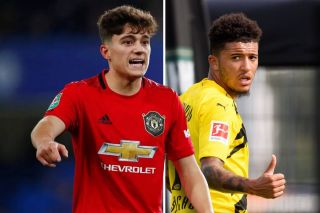