Manchester United defender Luke Shaw has been named the club’s 2018-19 Player of the Year, which has invited plenty of criticism among supporters.

The 23-year-old has had his best campaign yet in a United shirt, racking up over 40 appearances across all competitions while emerging as one of the first names on the teamsheet.

The England full-back joined the Red Devils from Southampton in 2014 with an impressive reputation but under the tutelage of Louis van Gaal and Jose Mourinho he was largely unable to make an impact, amid consistent fitness issues.

Shaw has come back stronger than ever this season, but he has ultimately been unable to inspire United to any success on the domestic or European stage, with a sixth-placed Premier League finish now on the cards.

According to Sport Bible, Shaw was awarded both the Sir Matt Busby Player of the Year and the Players’ Player of the Year at United’s end of season awards show on Thursday night, with Victor Lindelof and Paul Pogba left empty-handed after coming second and third respectively in the voting process.

Some fans think the England international’s triumph highlights the sorry state of affairs at Old Trafford at the moment, as one particular supporter stated on Twitter: “Sums up how f****** awful this season has been.”

Luke Shaw being voted our best player by his teammates and our fans just about sums up how fucking awful this season has been. Please, make it stop ?

Lindelof might have been a more popular choice given the vast improvements in his overall game over the last 12 months, while Pogba has had his moments during an otherwise inconsistent campaign.

United’s impressive first two months under Ole Gunnar Solskjaer saw a number of stars raise their game to win 14 out of 17 matches, but a major dip in fortunes since March has raised familiar questions over the squad’s staying power.

Shaw scooping the club’s major awards is a sad indictment of how far United have fallen more than anything else, especially given the fact the defence has shipped 50 Premier League goals over the last 11 months. 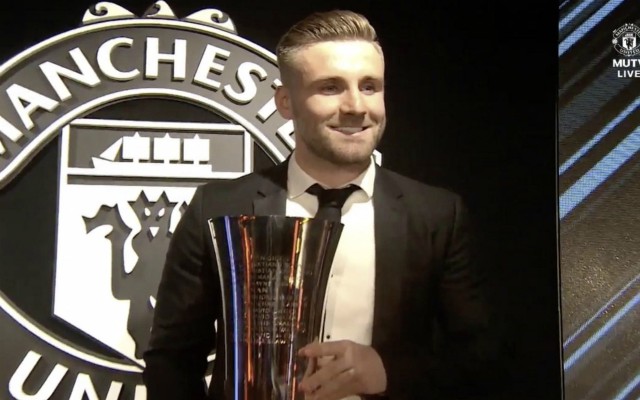 The likes of Marcus Rashford, Anthony Martial, Alexis Sanchez, Pogba and Jesse Lingard have all underperformed and the future looks bleak for Solskjaer’s current crop, ahead of a crucial summer transfer window.

After another trophyless season, United fans on social media certainly don’t feel like celebrating Shaw’s individual triumph and you can check out some more harsh comments on his win below, via Twitter.

Manchester City on verge of a domestic treble. Arsenal, Liverpool, Chelsea & Tottenham all in European finals. And Manchester United fans celebrating Luke Shaw being announced as player of their season. #ViewsFromThe6th

@ManUtd should have fucking cancelled the award ceremony. Besides Lindelof, I don’t think there are any other member in the team who could be proud of their season. Luke Shaw should be dropped from all awards just for his performance against Huddersfield #UnfollowManUnited

When a player like Luke Shaw wins POTY at ManU…
I can only???? #UnfollowManUnited

Luke Shaw winning #MUFCPOTY is an embarrassment in itself.

Luke shaw when he heard ‘ player of the year ‘ announcement #UnfollowManutd pic.twitter.com/JEjSHjj24S

Luke Shaw is your player of the year? Hold me please. ???

United conceded over 50 goals this season and the Player of the Year is a defender, Luke Shaw. Runner up? Another defender, Lindelof. Very high standards I have to say. The United Way.

And they talk about our standards dropping….. pic.twitter.com/CwLElbizpc

Luke Shaw and Victor Lindelof won Man Utd fan’s and player’s player of the year award yesterday. A rather ironic turn of events, considering Utd conceded the most goals in a season in over 50 years.