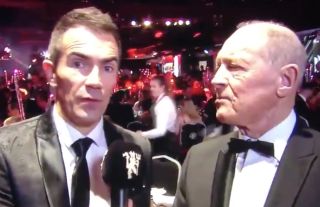 It’s been a rough season for Man Utd, and cricket legend Geoff Boycott isn’t one to dress things up based on a hilarious interview he did with MUTV.

Speaking at the end of season club awards, Boycott was asked for his thoughts on Man Utd this season and while it started off positively enough, it soon took a turn.

From slamming their playing style to the players not performing well enough, it’s fair to say that he hasn’t been impressed for the most part.

Despite the best efforts of the presenter to steer him down a more positive path, Boycott didn’t let up as he raised question marks over Ole Gunnar Solskjaer’s lack of experience at the top level to suggest that he can lead the Red Devils back to the top of the tree.

On one hand, it’s a bit too negative and it seems it’s difficult to get much joy out of Boycott on this subject matter.

In contrast, he’s simply saying how he feels and has given an honest and frank assessment of what he’s seen this year, and it’s undoubtedly likely that many other United fans feel the same way.