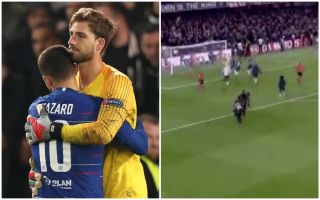 Eden Hazard booked Chelsea’s spot in the Europa League final with the winning penalty against Eintracht Frankfurt on Thursday night, but he showed his class immediately after.

The two sides couldn’t be separated in normal time, as they were locked at 1-1 on the night in the second leg at Stamford Bridge, and 2-2 on aggregate.

Following David Luiz’s crucial goal-line clearance in extra-time, the game went to penalties and after Kepa Arrizabalaga’s heroics, Hazard stepped up and slotted home the winning spot-kick to seal Chelsea’s place in the final in Baku on May 29 to face Arsenal.

However, before he joined his teammates in celebrating the win, the Belgian international wheeled around and stopped to console Frankfurt goalkeeper Kevin Trapp first, as seen in the video below.

He is then swarmed by his Chelsea teammates as they enjoy the moment in front of the Blues faithful, but it’s a brilliant and classy gesture from Hazard to have the awareness to go over to Trapp first before celebrating as it’s a heartbreaking way for any side to go out of a knockout competition.

Chelsea will hope that he can lead them to a major trophy later this month, having once again proved decisive to take them another step closer to securing a piece of silverware this season.

Class that from #Hazard shaking Trapp's before even celebrating. pic.twitter.com/y1AoGdrV4P