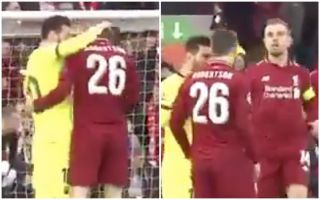 Lionel Messi clashed with Andy Robertson in Barcelona’s encounter with Liverpool on Tuesday night, but Jordan Henderson wasn’t having any of it.

The Catalan giants capitulated at Anfield in their Champions League semi-final tie, with the Reds advancing to the final in Madrid on June 1 to face Tottenham.

It came after a 4-0 win in the return leg, with Barcelona crashing out of the competition despite holding a three-goal advantage as they seemingly didn’t learn their lessons from last season’s collapse at Roma.

However, one of the sub-plots during the game was a clash between Messi and Robertson, with the Argentine superstar seen having his head pushed down by the Liverpool defender while he was down on the ground.

As seen in the clip below though, it appears as though Messi followed it up and had a word with the left-back, but after spotting his teammate getting a push in the head, Liverpool captain Jordan Henderson can be seen sprinting over to break things up.

It’s fair to say that Messi thinks twice about continuing the argument after Henderson’s intervention, with Barcelona and their iconic talisman now having to bounce back after another disastrous night in Europe.

Jordan Henderson alerted to Messi starting on Robertson and told him to back off. My skipper.

Love how Robertson didn’t get provoked from a slap, any Barcelona player would’ve fell on the floor crying. ? pic.twitter.com/950S0rh1Oj