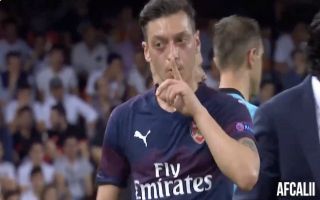 Arsenal midfielder Mesut Ozil tried to silence the Valencia crowd as he slowly walked off the pitch to make way for Henrikh Mkhitaryan last night.

The Gunners secured their place in the Europa League final against Chelsea with a 4-2 win at the Mestalla on Thursday, progressing 7-3 on aggregate thanks to a Pierre Emerick-Aubameyang hat-trick and an Alexandre Lacazette strike.

Unai Emery decided to substitute Ozil in the 61st minute and he helped Arsenal run down the clock by trudging over to the touchline at a snail’s pace, which earned him a yellow card from the match official.

Valencia supporters booed his antics and the German playmaker responded by shushing the home faithful, which of course, only riled them up even more.