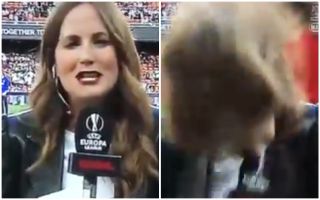 Spanish reporter Monica Benavent was previewing Valencia’s clash with Arsenal in the Europa League on Thursday night, but her segment was cut short.

As seen in the video below, she was unfortunately struck in the back of the head by a stray ball, with a player in the background desperately trying to prevent it from hitting her.

He does a pretty poor job of checking on her in truth as she disappears from the shot after clutching the back of her head, and so it’s hoped that she’s ok and isn’t too embarrassed by the incident as the broadcaster was forced to go back to the studio.

It’s not quite what she was probably expecting at the Mestalla, with Arsenal going on to secure a 4-2 win on the night and a 7-3 aggregate victory to advance to the Europa League final in Baku on May 29.

As for Benavent, she’ll hope for a call from her cameraman next time to give her the heads up to avoid being hit by an errant pass, or perhaps she may have to take up a safer spot on the touchline away from the players warming up…