Barcelona and Croatia star Ivan Rakitic has hit out at a newspaper that have published an article linking him with a £43M move to Inter Milan.

Rakitic has been one of Barcelona’s most important players these past few seasons, with the Croatian proving to be very influential in the club’s successes in both Europe and Spain.

The former Sevilla man is in his 30’s now, and it won’t be long before the Blaugrana decide to get rid of the Croat and replace him with a younger, fresher face.

And it seemed like the club were close to binning off the midfielder this summer after Mundo Deportivo reported that the player was closing in on a €50M move to Inter Milan.

However, these reports have been rubbished by the player himself, who took to Instagram to call out these rumours regarding his future.

As per the Mirror, Rakitic posted a screenshot of the article on his Instagram story, with the caption reading “Let’s see if you can stop making things up, I would appreciate it. I’m only focused on FC Barcelona, staying here for many years and winning the double. As a side note, my agent is called Arturo Canales.” 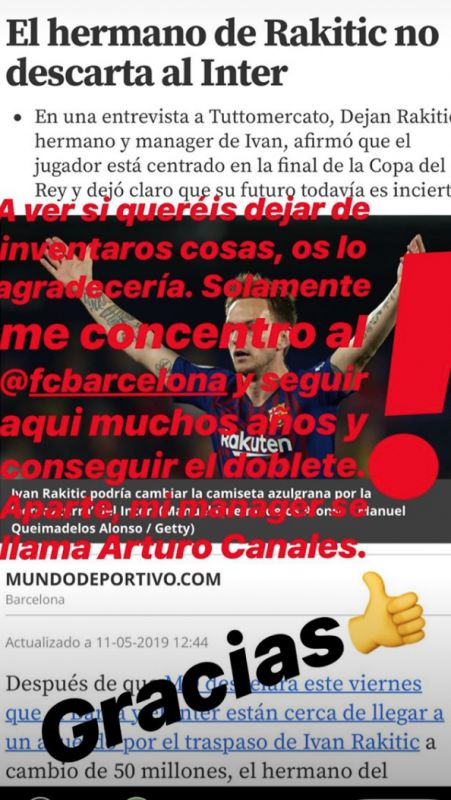 Selling Rakitic, who’s fast approaching the twilight years of his career, for €50m would be great business from Barcelona, however it doesn’t seem like the player is going to be heading out of the exit door at the Nou Camp if his actions on Instagram are anything to go off.

‘Thank you for everything, Leo’ – Barcelona departee details privilege of playing with Lionel Messi