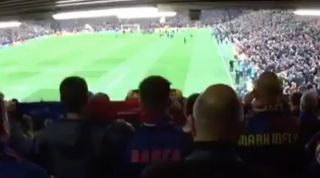 The Barcelona fans who made the trip to Anfield in midweek would have endured a nightmare as they watched their side crash out of the Champions League.

Despite going into the second leg of their semi-final tie with a 3-0 advantage, the Catalan giants couldn’t hold on to secure a place in the Final, as they succumbed to a 4-0 defeat after capitulating on Merseyside.

SEE MORE: ‘Would be massive’ – These Liverpool fans would LOVE to see raid on Barcelona

In turn, the travelling supporters would have been left stunned, upset and furious over the performance that they witnessed, but the Barcelona faithful still showed their class after the game.

As the Liverpool players and staff lined up in front of the Kop and ‘You’ll Never Walk Alone’ rang around the stadium in memorable scenes as the Reds celebrated reaching another Champions League final, the video below shows how the Barcelona supporters were simply left with no option but to applaud what they were watching.

It was a truly emotional and incredible sight to see the fans sing their hearts out after such an epic comeback, and it’s great to see that the opposition support appreciated it despite the manner in which they lost.