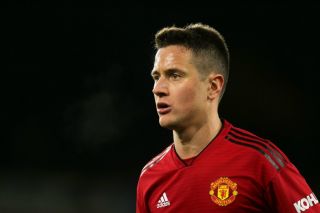 Ander Herrera has officially confirmed his exit from Man Utd this summer in a farewell video posted by the club on social media.

The Spaniard joined the Red Devils from Athletic Bilbao in 2014, and has since gone on to make 189 appearances for the club.

In that time he lifted the FA Cup, League Cup and Europa League, while he was named the club’s Player of the Year in the 2016/17 campaign.

However, despite continuing to make a key impact this season with 28 outings in all competitions, his contract is set to expire this summer and with doubts over his future at Old Trafford for months, he has now posted an emotional goodbye video, as seen below.

That will undoubtedly be a big blow for United, as the Spaniard’s energy, commitment and tenacity will be missed in midfield, and will now certainly have to be replaced moving forward.

It remains to be seen where he goes next, but based on the tweets below, there were many angry Man Utd fans who weren’t the least bit impressed with the news having now been confirmed.

Many hit out at the hierarchy in particular for their decision making in terms of contracts for several key senior players, with Herrera evidently a popular figure at Old Trafford and a player that many deemed deserving of a new deal and important for the future.

However, an agreement evidently hasn’t been reached between the two parties and so he’ll now move on with Solskjaer certainly now having to enter the transfer market this summer to fill the void he leaves behind.

So we give new contracts to Young, Jones and Smalling, keep Sanchez who’s always either injured or just shit and give him 500k a week plus bonuses just for playing. The whole club is a disgrace

What a joke of a club we are. Letting this man go while we still have Jones young darmian matic etc in the club and absolute joke. Finished with the club so i am????

Goodbye you wonderful man
One of the only players who got what it meant to be a united player
Thank you!!

Best player for us post ferguson era ?? thanks for everything ander ?? I’m crying

Absolutely gutted… This should not be happening. This is not the way we start our rebuild.. I hope there’s a massive boost around the corner because this is gut wrenching! Absolutely loved this guy, his character.. Style of play.. Passion.. Wore the shirt with pride!

the only passionate player in the team is now gone

He is REALLY leaving! #Sad

You’ve been my favourite player these past few years. You play with passion and desire which is why you’ll be missed by us.
Gracias y adios mi amigo!

i feel so bad??? but good luck he will forever Remain a Red???

Contracts to jones young and smalling, but not this guy smh

That’s it lads, keep paying Alexis £500K a week and let one of our best midfielders leave for free. Great work.

Can’t believe we’re letting him go. The one player who fought for the badge constantly. Once a Red always a Red, we love you Ander!

Good bye man. A player with a heart. Always giving 100%

Thank you for everything Ander. We all love you. Some great moments with you in that shirt. Your attitude has always been professional and you have given back to the fans, always.

Wish you good luck for your future endeavors. You will always be a fellow Red. ?

PSG stars publicly complain that the ref told them to “f*ck off” vs Man City and demand action May 5 2021, 12:25
Manchester City

Video: Irony as Man United midfielder Fred is sent off for the one challenge of the night that wasn’t that bad vs PSG Dec 2 2020, 21:45
Manchester United FC