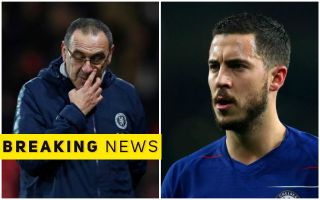 Chelsea have rested a few players today for the final Premier League game of the season against Leicester City.

The Blues have a Europa League final against Arsenal to think about for later this month, and it seems pretty clear that manager Maurizio Sarri is making that a top priority.

Despite Chelsea having already guaranteed themselves a Champions League place this season, it’s clear Sarri is more bothered about winning a trophy than about making sure his side wrap up third place in the table.

Most CFC fans probably wouldn’t argue with that, though Sarri may also be taking a bit of a risk by rotating his team before a big game that they’ll have to wait a little while to play in.

Here's the Chelsea team to take on Leicester! ?#LEICHE pic.twitter.com/lLe9i0pIbW

It remains to be seen how fit Eden Hazard would be for the Arsenal game without a run-out against Leicester this afternoon, though it also makes sense that Sarri would want to avoid his star player getting injured in a league match that is not of huge significance.