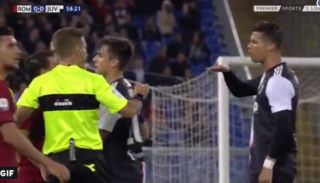 Watch the video clip below as Ronaldo responds to Florenzi’s angry rant at him by telling him he’s too short to talk.

"You are too short to talk." Damn Cristiano. pic.twitter.com/p2vku5xIMr

This seems like classic Ronaldo behaviour, though it’s also the kind of thing that means many fans prefer the more modest and humble personality of his long-time nemesis Lionel Messi.

The Portuguese could show his opponents more respect at times, though others would argue that would mean he lost the competitive edge that has made him one of the all-time greats of the game.

Florenzi got his own back, however, scoring later in the game to make it 1-0 to Roma.