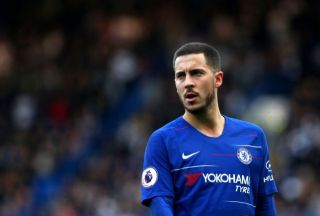 Chelsea star Eden Hazard has spoken about his future at the club in quotes that are embargoed until 10.30pm tonight.

The Belgium international has long been linked by Sky Sports and numerous others with a summer transfer to Real Madrid, with the player not helping to dampen speculation by not signing a new contract to extend the deal that expires at the end of next season.

This will all seem eerily familiar for Chelsea fans, who lost goalkeeper Thibaut Courtois to Real Madrid in similar circumstances last summer.

The latest on Hazard will be revealed in just over an hour’s time, with Evening Standard journalist Simon Johnson tweeting that the 28-year-old’s embargoed quotes can be released then.

#Hazard has provided an update on his #cfc future. More here at 10.30pm.

While we cannot be certain for sure what Hazard will say, it seems like it might be big news if the reporter above felt it was worth mentioning the player’s words and the time they’ll be available for fans to hear.

Still, some CFC supporters are not convinced it’s going to be anything groundbreaking.

In fact, most are expecting yet further delays to a decision on his future, with Chelsea still having the Europa League final with Arsenal to play…

He's making them wait until 10:30 only to tell them that Hazard has said nothing is decided and he's got the final to focus on https://t.co/0bKTTwnaGr

Absolute scenes when Hazard’s thing at 10:30 is that he’s deciding after Europa Final

It’s a news embargo mate they always wait until 10:30 nothing strange about it. We all know it will be him leaving/hinting at it it’s only because it’s Hazard they making a big deal

Announcement about Hazard at 10:30 apparently

Let me guess;
He doesn’t know

Hazard ‘my mind isn’t made up, I just want to focus on the final and then I can think about my future’ https://t.co/ura1TWiogp

All these Chelsea reporters coming out with these cryptic Hazard tweets.

I mean it’s way more likely he’s said he’s leaving but I also doubt he’d come out and announce it before the EL Final… https://t.co/34WG3pAtl3