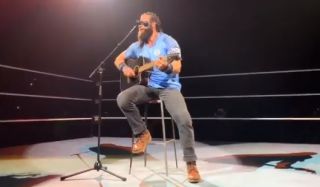 Today’s Premier League title race news was such a big deal that even wrestlers were getting in on the drama.

Watch this bizarre video below as WWE’s Elias trolled Liverpool for missing out on the Premier League title to Manchester City with a rewritten version of Yesterday by the Beatles.

Note to self @iameliaswwe: In the home of The Beatles, you probably shouldn’t rewrite the lyrics to their hit song “Yesterday” or wear a certain team’s jersey! #WWELiverpool pic.twitter.com/ETsseTZkQ4

Elias starts out performing the regular version of the Paul McCartney classic, which went down a treat as he was performing on Merseyside.

But then it all takes a turn for the worse as he puts a City shirt on and sings a version referencing LFC being beaten to the title today.

To be fair, you can hardly hear the lyrics due to the level of volume of boos from the crowd.