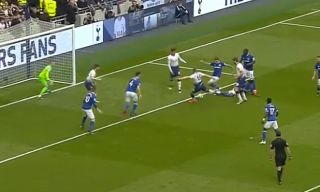 Eric Dier has scored an early opening goal for Tottenham against Everton that means there’s probably not going to be much last-minute drama in the top four race.

Spurs have their place in the Champions League spots all but secured, though a defeat for them and a win for Arsenal with an eight-goal swing would see Unai Emery’s side leapfrog their rivals.

However, Dier has settled the nerves with this well-taken early goal after Everton failed to deal with Erik Lamela’s corner.

Tottenham will surely want to end their Premier League campaign on a high anyway to put themselves in good shape for their Champions League final clash with Liverpool next month.