Chelsea striker Olivier Giroud is the subject of interest from Nice, who are reportedly weighing up a summer bid for his signature.

The Frenchman has endured a frustrating 2018-19 campaign at Stamford Bridge, playing second fiddle to Alvaro Morata and Gonzalo Higuain, restricted mainly to a starring role in the Europa League.

The 32-year-old has featured in over 40 matches for the Blues across all competitions but has only been afforded seven Premier League starts, with Maurizio Sarri even opting to play with Hazard in a false nine ahead of him on a regular basis.

According to The Sun, Nice technical director and ex-Arsenal star Giles Grimandi has confirmed talks over a summer transfer for Giroud are ongoing, after being given the go-ahead by club boss Patrick Viera.

As per The Sun, Grimaldi told Canal Football: “If Olivier Giroud decides to come that is because he likes the project at OGC Nice. If Olivier is not happy at Chelsea, if he wants to play, we will take all the elements into account.

The veteran centre-forward has grown frustrated with his role under Sarri and wants to secure regular playing time, but at the moment it appears he has fallen down the pecking order at the Bridge.

Chelsea are still planning to activate the one-year extension clause in his current contract, which expires in June, but Nice are hoping to lure him away from west London when the market reopens. 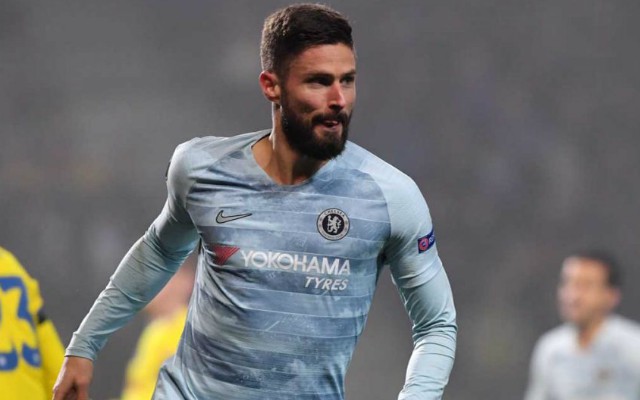 This particular deal could hinge on whether or not a proposed two-window transfer ban is enforced at Chelsea, who are currently in the middle of a drawn-out appeal process.

Should the Blues be granted a legal reprieve, Sarri will be able to bolster his current squad and perhaps offload Giroud to make room for new attackers, but if not, the Italian could be left short on options.

According to AS, Hazard is close to completing a move to Real Madrid, while Higuain is due to return to Juventus at the end of the season following a six-month loan move.

If Chelsea are unable to sign any new players this summer, Giroud and Morata will likely be the club’s only two remaining senior forwards, with the latter set to return after a loan spell at Atletico Madrid.

The France international’s future is still very much up in the air, but he might relish the prospect of a return to his homeland after a difficult period at the Bridge.