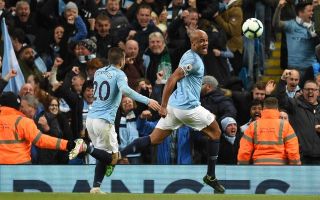 Liverpool players reportedly all posted the same emoji to each other on WhatsApp as they followed the recent game between Manchester City and Leicester City.

Vincent Kompany scored a stunning long-range effort with 20 minutes to go in that game to give City a 1-0 win and put them in control of their own destiny on the final day of the Premier League season today.

The Belgian doesn’t score often, and certainly not in that manner, so to do it at such an important moment in the season would no doubt have stunned Liverpool players hoping for a slip-up from their title rivals.

The Reds can still in theory win the league today if they beat Wolves and City fail to beat Brighton, though on paper that looks an easier game for them than the Leicester one.

According to the New York Times, LFC players all posted the head exploding emoji in their WhatsApp chat group, which seems an appropriate reaction to such a huge goal.

Reds fans will hope there can be one more stunning, shock moment in their favour this afternoon.