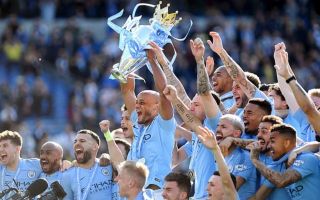 The Belgian defender lifted his fourth Premier League trophy as City skipper, following a 4-1 win over Brighton on the final day of the season.

With Liverpool beating Wolves, City also needed to ensure they didn’t slip up, but made sure of getting their hands on the trophy with a superb 14th win in a row.

Still, unlike last season when they strolled to a comfortable title victory without much competition, City were run extremely close by an excellent Liverpool side this term.

Kompany acknowledged that after lifting the trophy with City today, paying a neat tribute to the Reds for their heroic efforts and explaining how their challenge made this win even more satisfying.

‘Back to back…. I think it was the hardest and most satisfying Premier League ever,’ Kompany told Sky Sports in the video clip below.

‘Liverpool were exceptional this year – I don’t mean to rub it in they did not deserve to lose it today.

‘We’ve played against such a good team. We won at home at the Etihad and until now we’ve managed to stay ahead.’

City are now going for a domestic treble as they look to win the FA Cup final against Watford, while Liverpool can make sure their efforts this season don’t go unrewarded by winning the Champions League final against Tottenham on June 1st.